the aquabats! are a ska/punk band formed in huntington beach, california in 1994. they have superhero personas and interesting lore and backstories. they dress in matching uniforms and sing about fun stuff and battle enemies onstage. they refer to their fans as "cadets" and they put on a very fun show. aside from their battles with enemies they also have giant inflatable pizzas that kids crowdsurf in, they throw water at people and it's just a very fun thing overall packed with energy. and their music is mostly upbeat and happy. i got into them on may 2018 and the first song i heard was cat with two heads! it's really good.

they have their own vehicle they call the battletram. it's been customized to look like a cool superhero hideout but in vehicle form. it's really cool.

their lineup has changed a lot over the years. they started as an 8 (sometimes 9) piece band with a horn section, but ever since 2005 they've been a 5 piece band. they ditched their horn section and ska sound for a more pop-punk sound. either way, both their ska sound and their newer stuff is amazing and i definitely reccomend it.

their current lineup consists of: mc bat commander on vocals, crash mclarson on bass, jimmy the robot on keys/saxophone, eaglebones falconhawk on guitar and ricky fitness on the drums.

they also have a tv show, called the aquabats! super show! it originally aired on tv during 2012-2014 but new episodes are airing every other saturday on youtube. check out my page for the show for more info about it :] 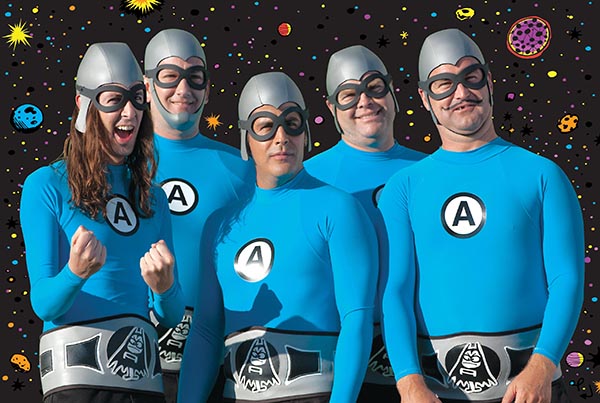 youtube playlist of all their music videos (including supershow videos)

more links to be added soon

mostly taken from old websites, tumblr, myspace and livejournal. others are made by me! :]